Have you ever photographed a candle?
This is a really yummy red candle shot without flash... 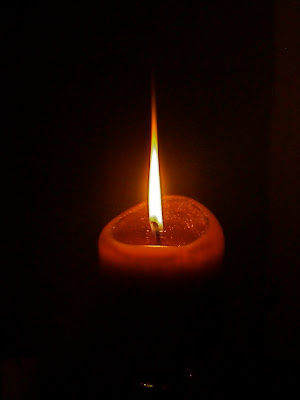 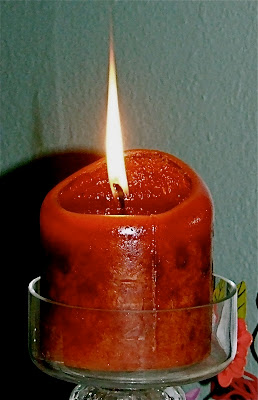 Funny huh?
I adore candles and with the rainy weather we have been having,
they are being burnt for sure!
On another note...
I have 4 darling little cousins.
In some ways, they are more like nieces, but they are cousins and
three of them insist that I make them their Christmas presents.
Aren't they cute??? 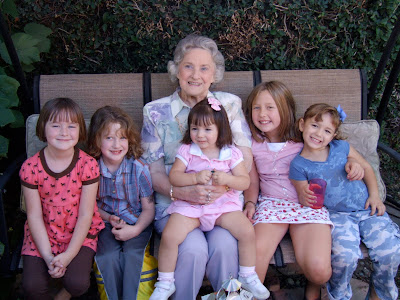 This is an older pic, Nana the Matriarch of the family is center.
After years of my three sons dominating the scene.
Our family had 5 girls in a row...
Oye VEY...GIRLZZZZ....
They are all darling and wonderful girls.
Second from the left is Samantha, Sam as she is called.
Sam is NOT a girlie girl, so creating a piece of jewelry for this
little lass is even more special.
Sam likes Boy stuff, skulls, snakes, skateboards and the like.
So I sketched and hand painted a skull and crossbones for her on a 1x1.5 inch paper.
Adding her initial "S", the piece which was then applied to a bezel using diamond glaze.
As my New Year resolution is to incorporate original art in my pieces, this piece
validated for me that I am on the right track. 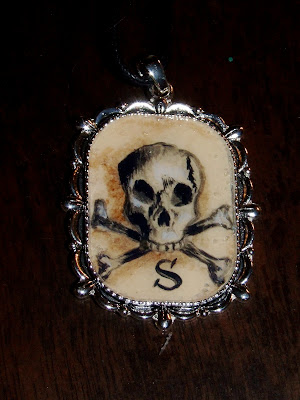 Earlier this past year at the Point Loma Garden Walk Tour and show I met a lovely customer named Wendy.  She mentioned that when her Grandmother passed, her family inherited several pieces of costume jewelry.  I told her that I often took family pieces
and re-worked them into more modern jewelry.
Three weeks ago at Chateau de Fleurs Wendy came out and brought me several pieces.
We sat and went over them.  I told her which pieces should not be disassembled as they were too valuable or perfect as they were.
Then what was left that could be made into some really fun pieces.
Here is the result... 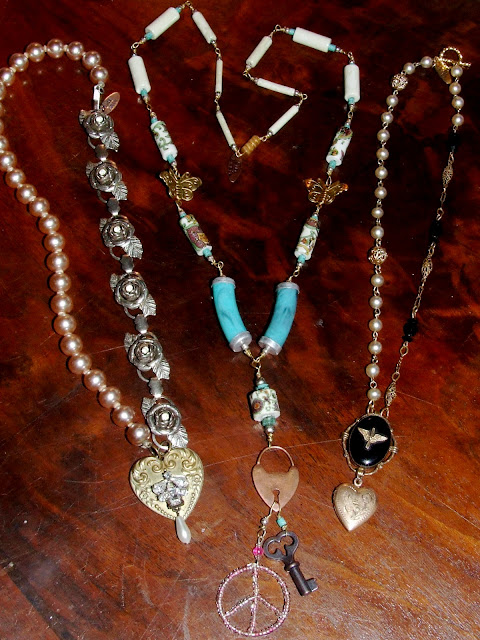 Bracelets and necklaces were combined to make the left and right pieces.
The center piece was a bit more tedious.  I disassembled two necklaces
and wire wrapped each section individually.
The dangles were my addition, the peace sign is a hand beaded piece I do. 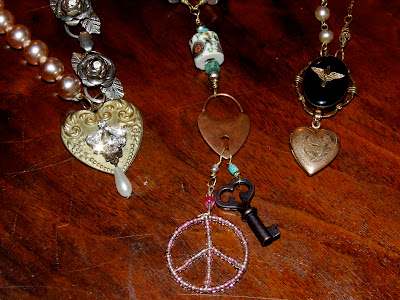 The heart on the left was also from my treasure trove, but the piece on the right is my fave!
When Wendy showed me those pieces, she really didn't know anything about the black one.
It is a World War Two Airforce Sweetheart piece.  During the wars, lockets and brooches were made with the symbol of whatever branch of the military the soldier was in.  These pieces were given to Moms, wives and girlfriends, thus being called "Sweetheart" pieces.
I ADORE the symbolism of them.
The wings and propeller adorn the front.
When you flip it over, there is a locket on the back side with a Man's picture in it.
The funny part here is that Wendy doesn't know who the man is,
or even knew there was a locket on the back side.
She was going to research it further to see if it was Grandpa or another family member.
Her Grandma worked at the Salvation Army (I believe that is what she said, or
she just loved to shop there).
Grandma LOVED jewelry.
So, whether the man is Grandpa or some other old souls photo, it obviously
meant something to her Grandma.
I paired it with a beautiful etched gold heart locket, also her Grandmas. 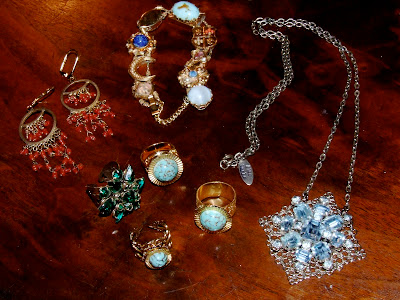 Lastly, the large light blue piece is a Vintage Vendome Brooch that was converted to a necklace,
the blue faux turquoise rings were a pair of cuff links and a tie clip.  The Green rhinestone was a lone clip earring.  The red dangle earrings were screw backs that were simply converted to pierced and the bracelet is a rather old Victorian styled slide bracelet.  I was going to take it apart, but it is a very nice gold plated piece that only had a few missing stones, so the stones were replaced and I added a new safety chain. It should be worn as is.
It has been a week filled with completing custom orders for clients.
4 clients down, 3 to go.
Have a happy rainy weekend!
XO,
Lisa
Posted by Lisa Loria at 11:16 AM 5 comments:

I have been so remiss at blogging the past few weeks.
December 3rd/4th were spent in Fallbrook at Chateau de Fleurs.
One of my favorite shows I do 4 times per year.
It is always a JOYFUL show, full of wonderfully talented ladies, run
by two of the kindest and most giving artists, Christie Repasy and Rita Reade.
The customers are tops and sales always Rock!
Right after that I hurried home to get ready for another show on Saturday the 11th.
I was honored and actually quite nervous to participate in an Artisan Sale
and the DA Art Gallery in the Pomona Arts Colony.
It was my first foray into selling and a REAL Art Gallery.
And I was kind of intimidated at first, but it also
wound up being a lovely show, surrounded by talented artist and
as I knew only the curator, it was fun meeting new friends and customers.
So, this past Sunday became the breather day so we could start
wrapping our brains around Christmas as our home wasn't decorated
and not one gift purchased...EEK.
When to my surprise Rita calls me and says in her wonderful Italian accent...
"Chateau de Fleurs is in the new Romantic Country and guess who's picture they used???
YOURS."
How exciting, how honored...and what do I ask her...
"do I look fat?"
What a nerd.
So, after the fourth store I hit yesterday, finally found a copy at Ralphs!
Woohoo!
Chateau deserves this.
Rita and Christie are ethical and go above and beyond for this show. 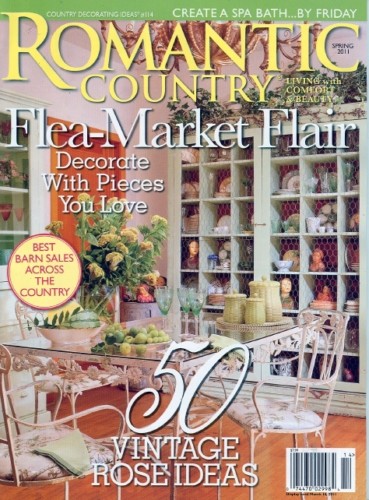 For me, I am immeasurably honored to have my booth as one of the
representations for Chateau de Fleurs. 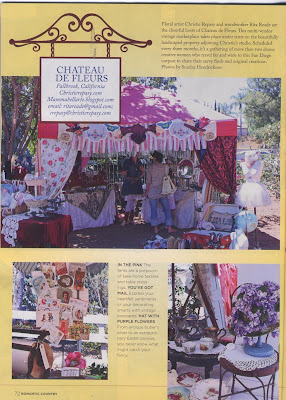 My friends Lori and Jamie Maritn of Two Wild Roses are the proud artists
behind the two bottom pictures.
What a Joyful way to end the New Year.
To top it off, my other TOP show that I do twice a year
is featured on the previous page...
GLITTERFEST
Sheryl and Diane also go above and beyond
for Glitterfest. 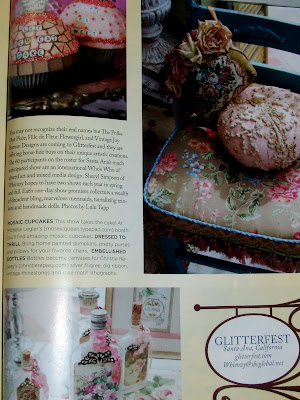 I guess, the summation for this is that hard work and integrity pay off.
All of my fellow artists and the owners of these shows
work so hard to ink out a living making our art.
and it shows.
Thank you Fifi O' Neill for your beautiful Magazine
and thank you
Sunday Hendrickson for your amazing photography.
Sunday's Studio is also featured in this Romantic Country issue.
Go out and Buy it!
I've already read it cover to cover!
Happy Tuesday everyone!
11 days until Christmas...Yikes!
Posted by Lisa Loria at 8:17 AM 6 comments:

All you need is LOVE..

I think, or at least hope each of us have had a Family Member or friend that
has inspired us in one way or other...or many.
As a kid, my Uncle Tom was my idol (still is).
He was a young uncle, an artist, musician...
not like everyone else in the family.
He was COOL.
As a kid, I had the great fortune to get to spend significant
one on one time with him.  He lived quite the bohemian starving
artist lifestyle, residing in the coolest little vintage home in Pasadena.
A Graduate of Otis Art Institute, he stayed steadfast on his
artistic past.
He'd pick me up in a sometimes barely running cars...one was
an old vw bug with a sunroof that was rotted out, so if it rained you either
got wet or used an umbrella while driving.
I am sure he might bemoan these poorer memories, but it was so friggin cool to me.
Being 10 years old,  hanging out with my Artist Uncle who took me all over
Los Angeles, to musuems, galleries, lunch under a high rise building,
Olvera Street, Little Tokyo where I discovered the ORIGINAL Hello Kitty line
when you could only buy it in Little Tokyo and all of the writing was in Japanese...
hanging out at his studio, watching him paint or make music.
Uncle has come a long way from those days,
he is an accomplished Artist and Musician,
is Art Director for a Major Record Company...now lives in an ULTA cool
Contemporary home in Pasadena.
His Graphic art work has garnished him Grammy nominations,
his Music has been recognized internationally.
I have been able to attend as an adult several of his
Art Installations and Love them!
His Google list is impressive...
Click his picture if you are curious. 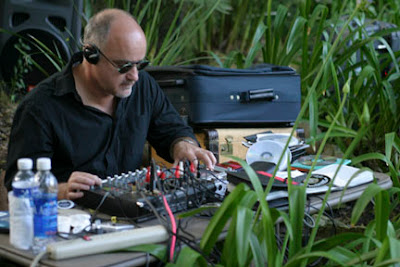 As we don't get to hang out like we did in the "old days"...
(he is going to hate the old days reference)
LOL.
I get to see him on Holidays and he
was at my house for Thanksgiving.
We have both made New Year's Resolutions to spend
MORE time together in 2011.
Uncle knows I LOVE music...don't have or watch TV.
Have never seen American Idol, Sex in the City, Dancing with the Idiots,
Desperate Housewives, or the lot.  Direct TV was shut off several years ago.
The kids and I do have over 30 gigabytes of music on my computer
with a multitude of CD's we have yet to download.
Uncle further solidified his COOLNESS to me by gifting me the entire
ALL NEW FULLY DIGITIZED BEATLES Collection!!!
Woohoo!!! 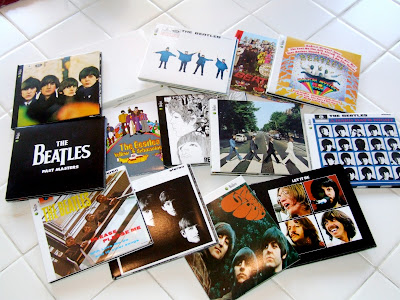 Yes, we have been singing the Beatles around here all week.
What is your Favorite Beatles Song?
Thank you Uncle Tom...I LOVE YOU!!!
Posted by Lisa Loria at 8:30 AM 5 comments: