About 3-4 weeks ago while shopping at my favorite place...Armstrong Nursery.
I purchase two yellow flowering bushes.
The sign above them said, "butterfly Lover"
Yay!!!
Also purchased two butterfly bushes that day as well.

While Rob and I have consistently planted with intention,
our yard is full of flowering perennials which attract butterflies, humming birds, moths, bees, etc.
With our pond and two other water sources in the yard, it is also teeming with birds, dragonflies and LOTS of lizards...oh and our resident bullfrogs we raise from purchased tadpoles. 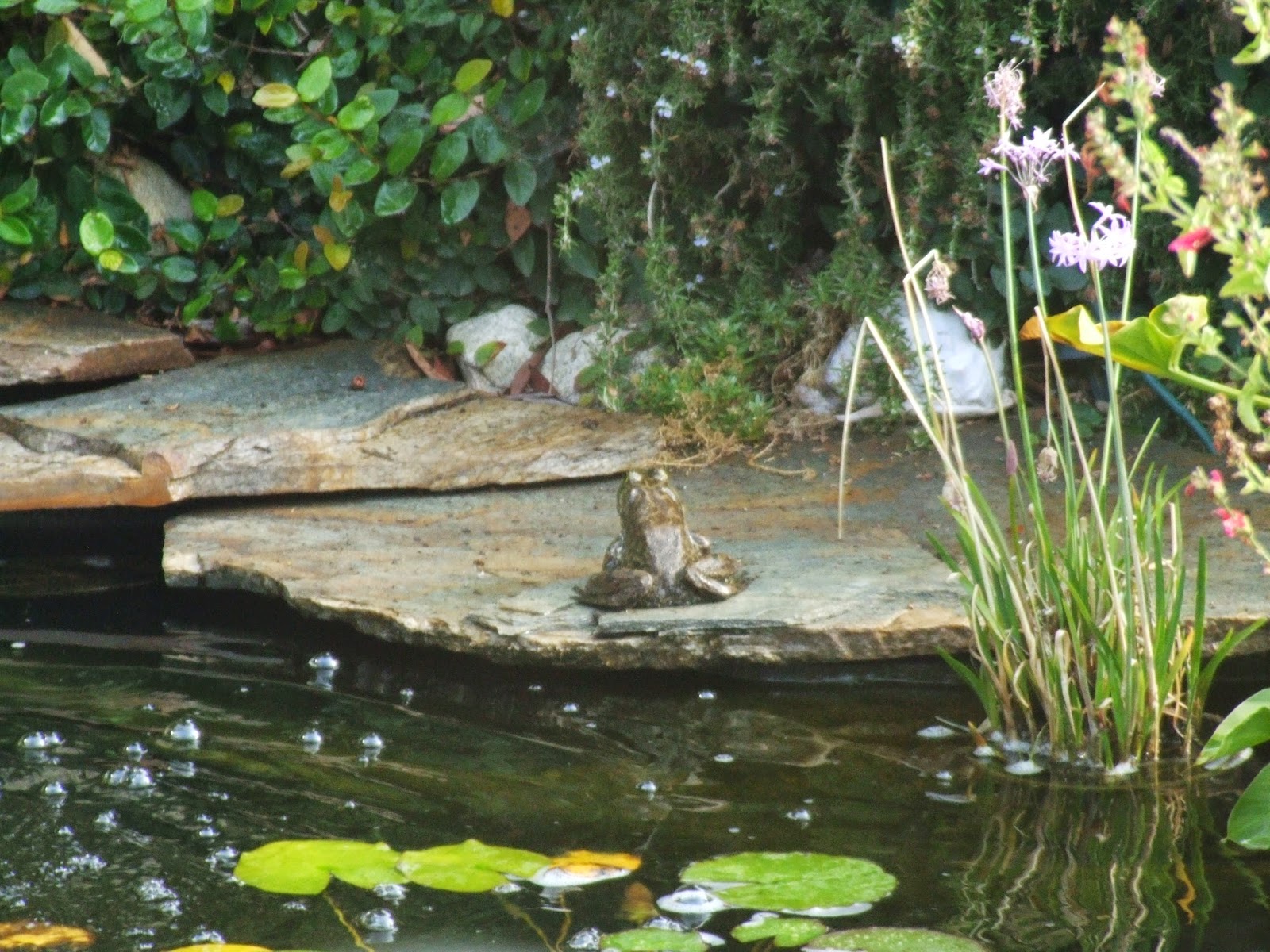 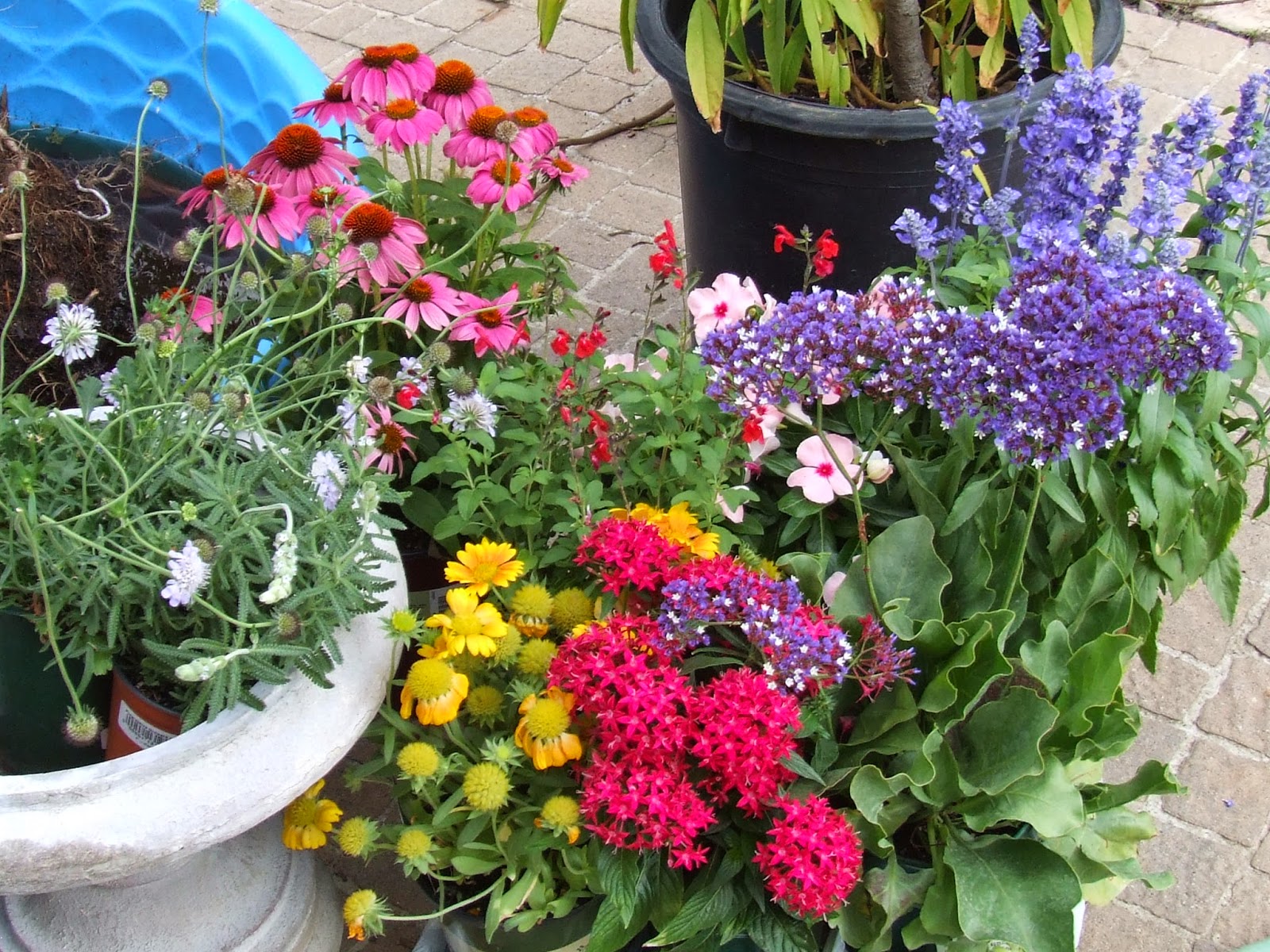 But I had never seen this plant.  Asclepias  was on the label. 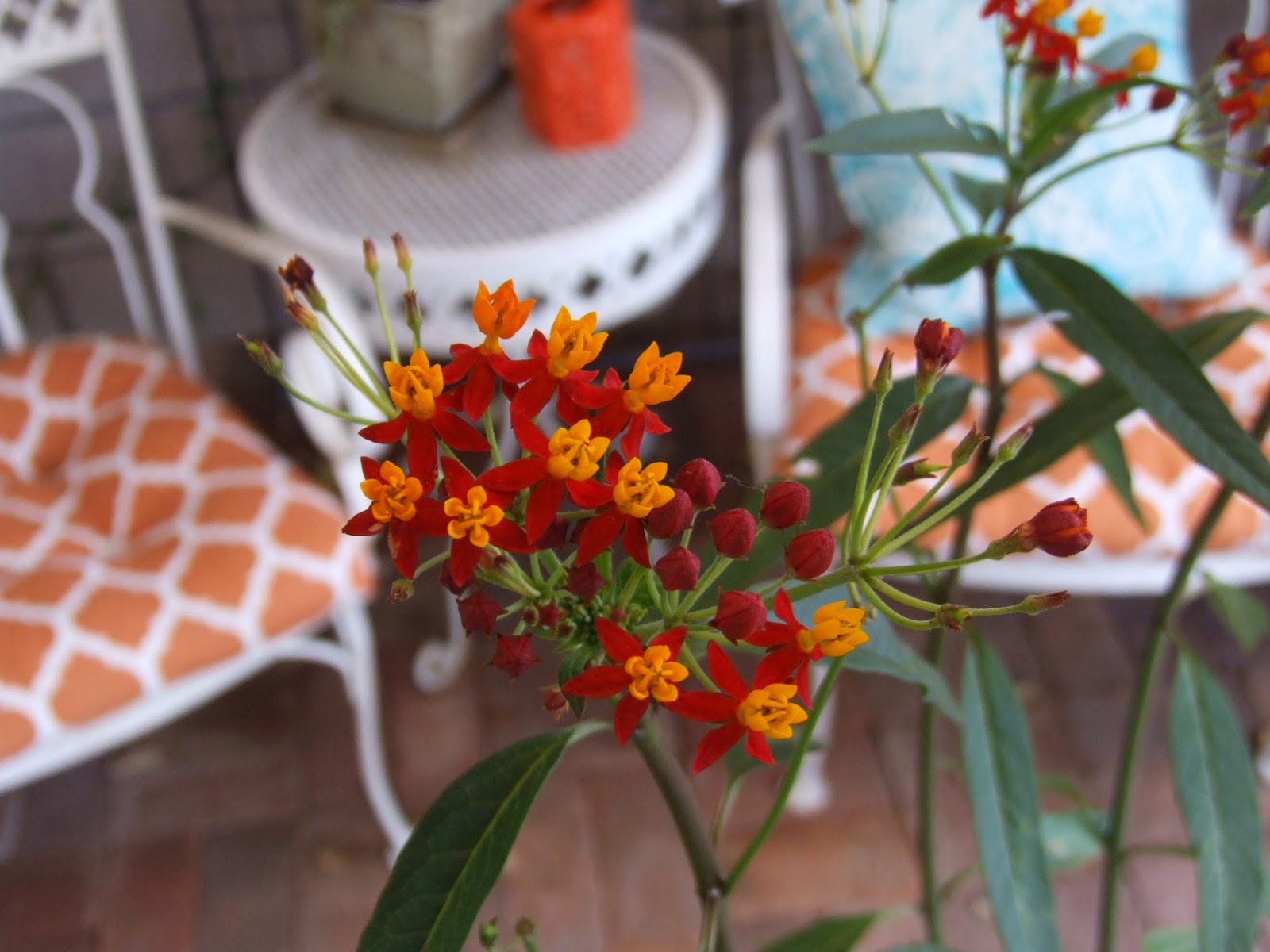 The next morning while having coffee, I noticed a striped caterpillar on it.
Hmmm...what is this?  I didn't know. Der.
Placing it in a container with holes on top, it went back to Armstrong with me to have them identify..."Friend or Foe".
Thrilled was I to find out it was a Monarch caterpillar and Milkweed was their host plant.
At that point I only found three on the plants and let them do their thing.

Next day, they were gone.  Found one dead on the ground being devoured by ants who LOVE the plants too.  I was heartbroken.

Monarch butterflies are endangered.  I've read so many articles on this fact.
Pesticide use in commercial farming is the main culprit, but I will go into my own personal experience with that at the end of this post.

Next morning while having coffee, I examined the plants to find 12,  5 mm long babies.
YAY! 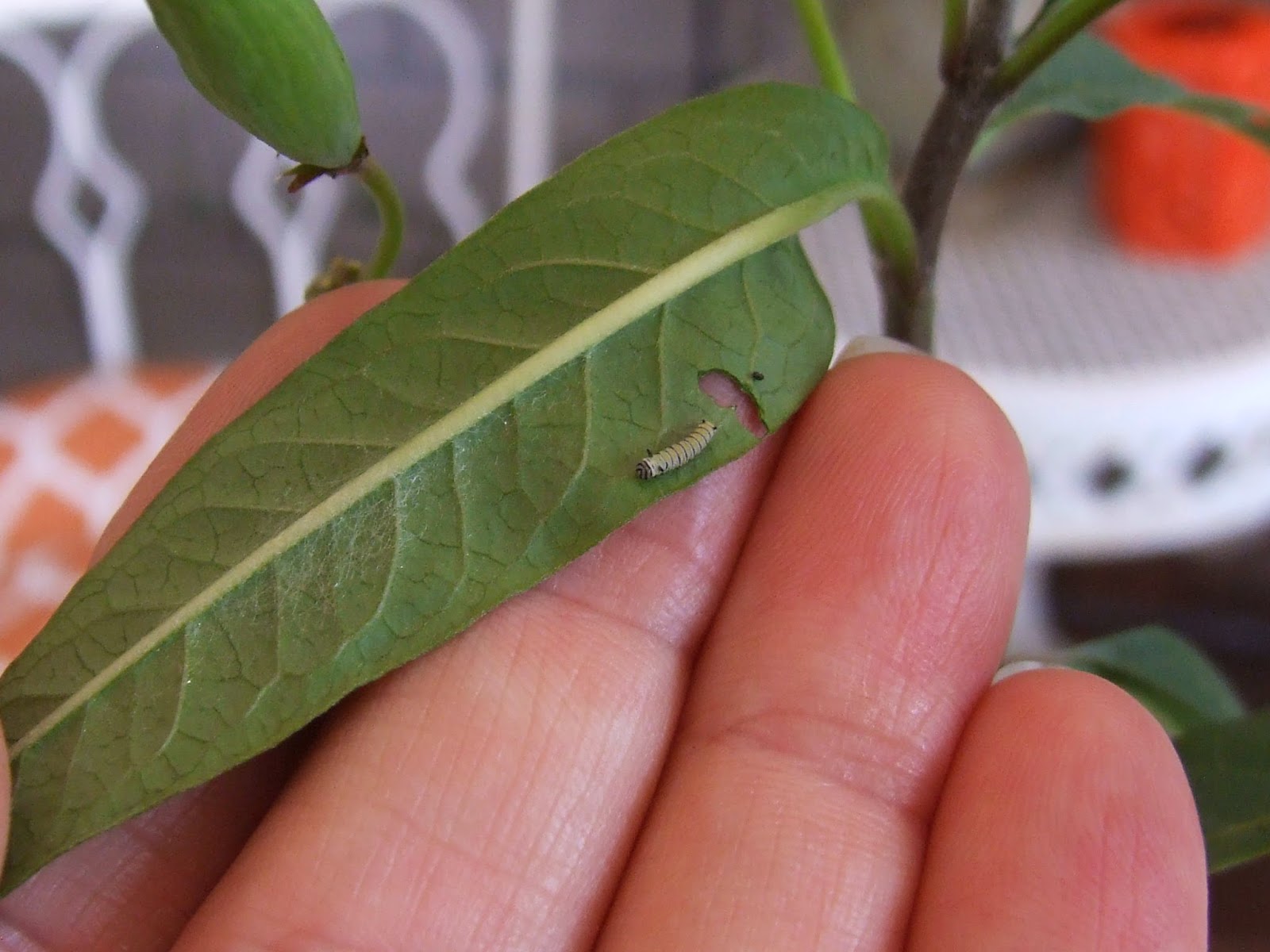 Now to tackle the ant problem.
We have long since abandoned pesticide in our yard and home, but ants are the exception,
using only ant killers that target ants.  We take great measures to target ants only.
So we set about clearing our patio of these pests so the butterflies could not be bothered.

After doing some research online, we constructed a habitat by using an upside down mesh laundry hamper.  Seemed great, but I wanted to use the pot they were in for some planting. 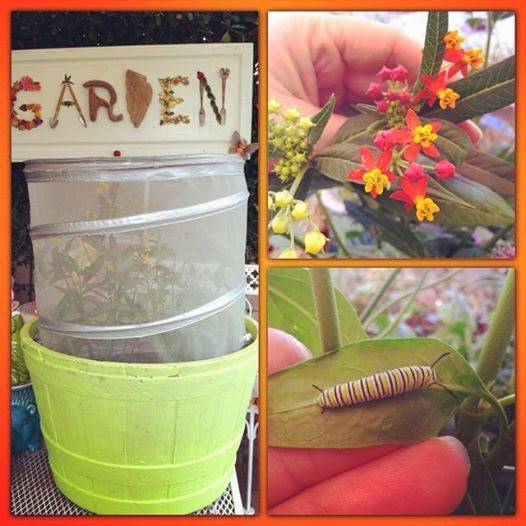 Plus the other problem was a female monarch kept coming over to the enclosure wanting at the plants.  We'd lift the lid off to allow her access and watch her lay eggs. 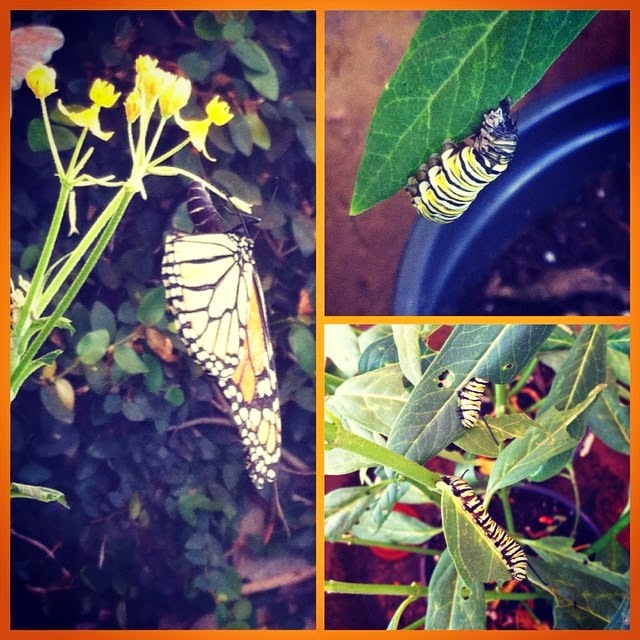 Hmmmm.....bigger enclosure and more plants.
These plants aren't cheap either 9-10 bucks a pop.
My new enclosure is larger and on a table top.  I have containers of water under each table leg to create "Moats" too keep ants and other crawly bugs from getting up inside.
Happy I held onto the decorative mosquito net from Emily old room decor.  I knew it would come in handy for something.

Back to Armstrong we go.  Wanted plants both in and outside the enclosure...to keep the process going.  They were out of plants, but we overhead a lady say she saw some at Lowes
and she was told they were pesticide free.
Off to Lowes, but the 3 plants they had looked so stringy and horrid,  we passed.
They did have caterpillars on them, but 9 bucks each for stringy plants.
We left and went to Home Depot.  They had a few plants, by the grower Vigoro.  Not a single caterpillar or egg to be found.  Made me wonder if there was pesticide on those, so we passed.
Next morning, called to other stores, no milkweed...so back to the original Lowes.
Plants were moved to a cart off to the side.  Asking the sales guy, "are these sold?"
He replied, "nope, the vendor wanted to remove them since they looked so bad, but I told him he couldn't because of all of the caterpillars on them."
So we geeked out for about 10 minutes about Monarchs and he said he was clearancing them out and I could have them for 3 bucks each.  SWEET!
He was thrilled to hear about my little Monarch Nursery I was setting up.

So, now here is my new Monarch nursery.  At least 30 Caterpillars on 3 plants.  All at various stages of their development, called instars. 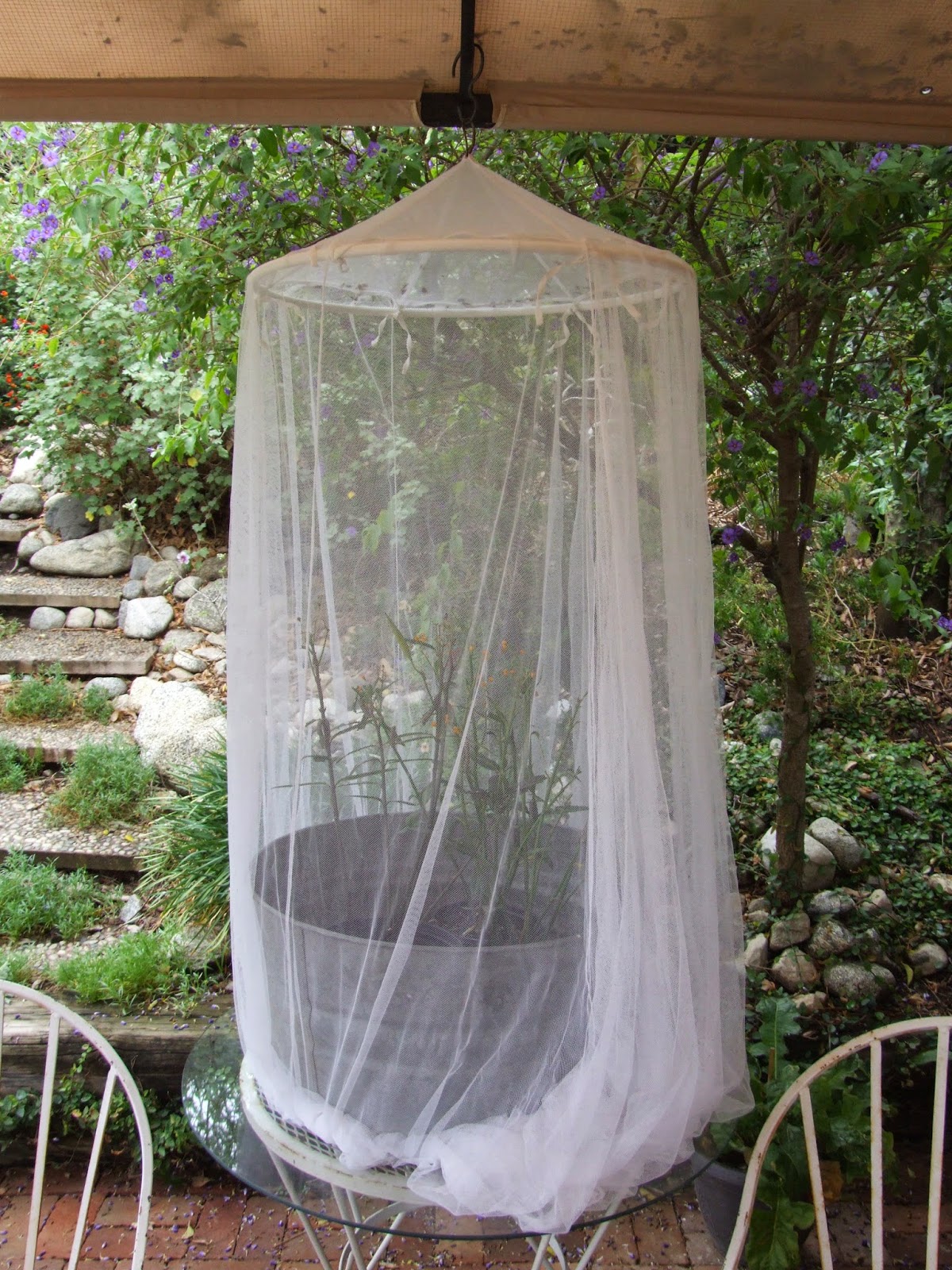 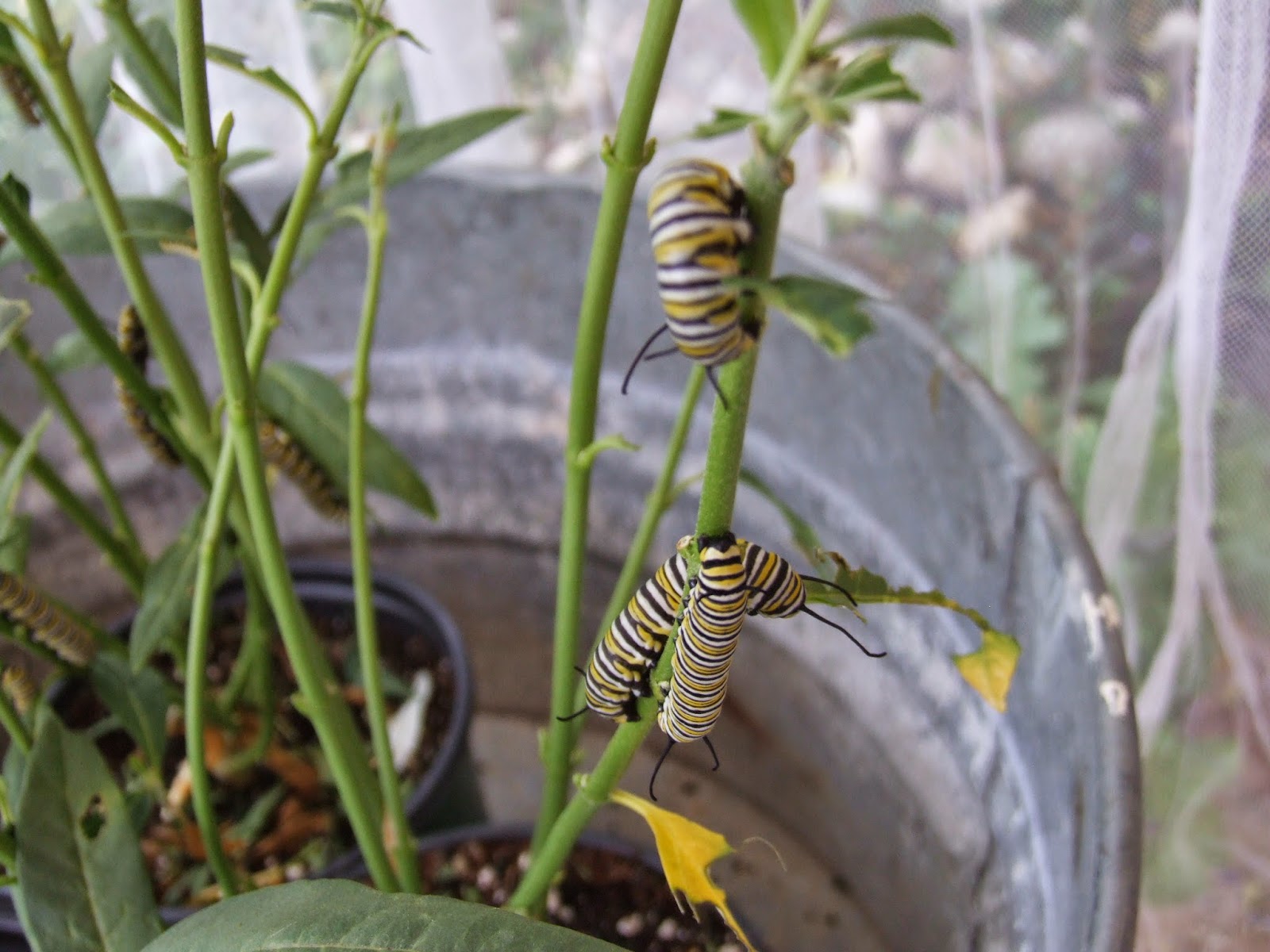 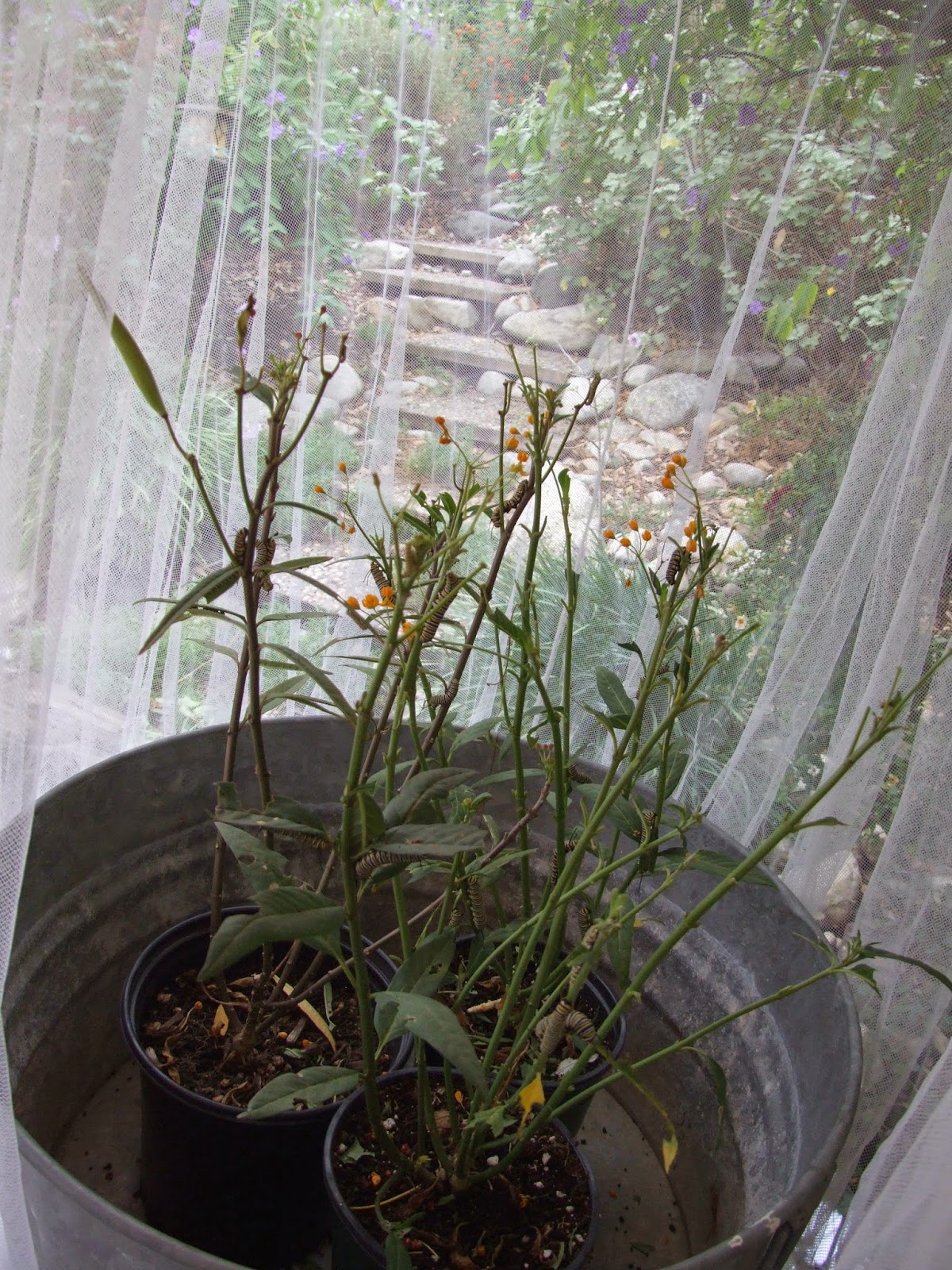 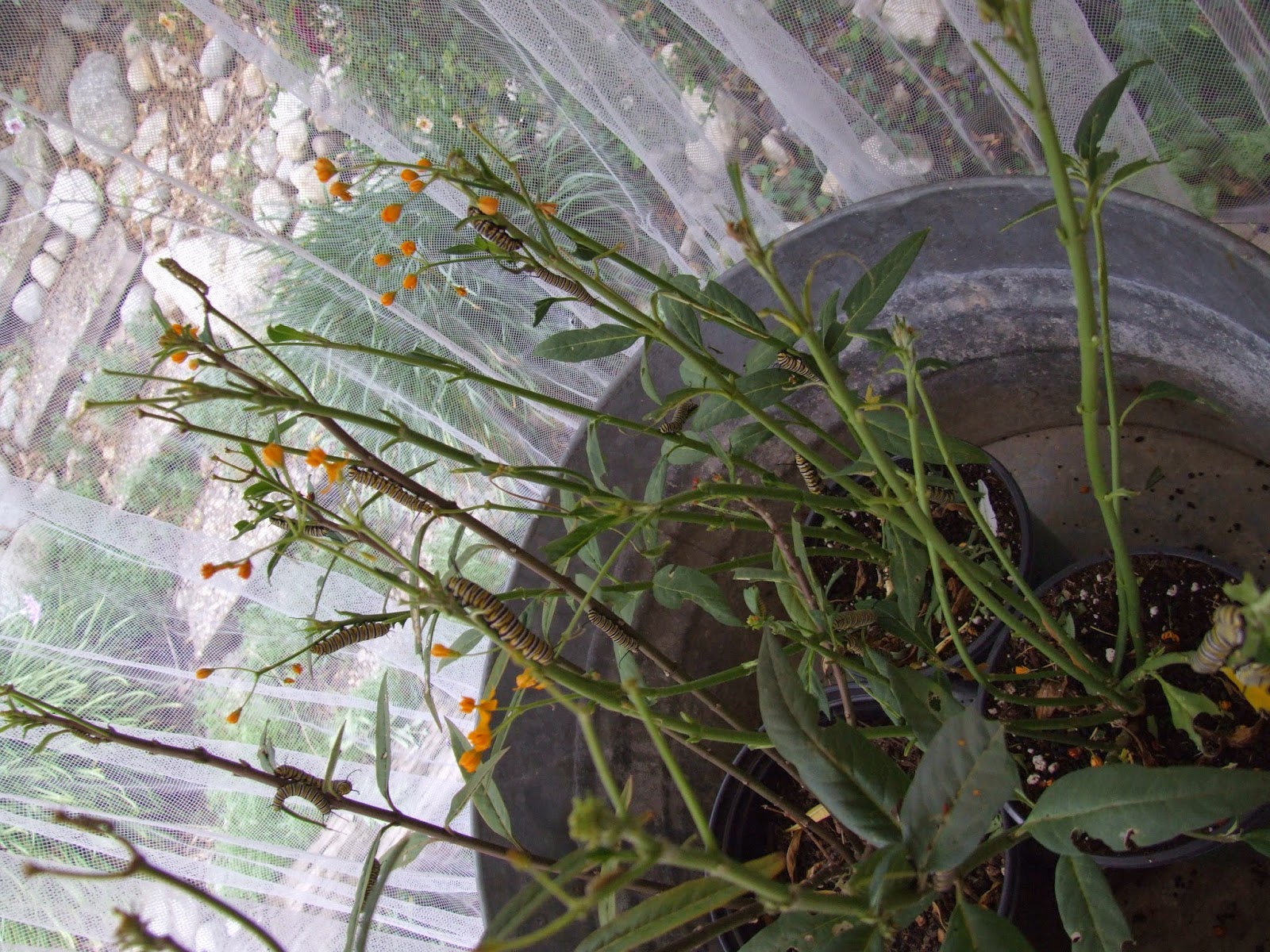 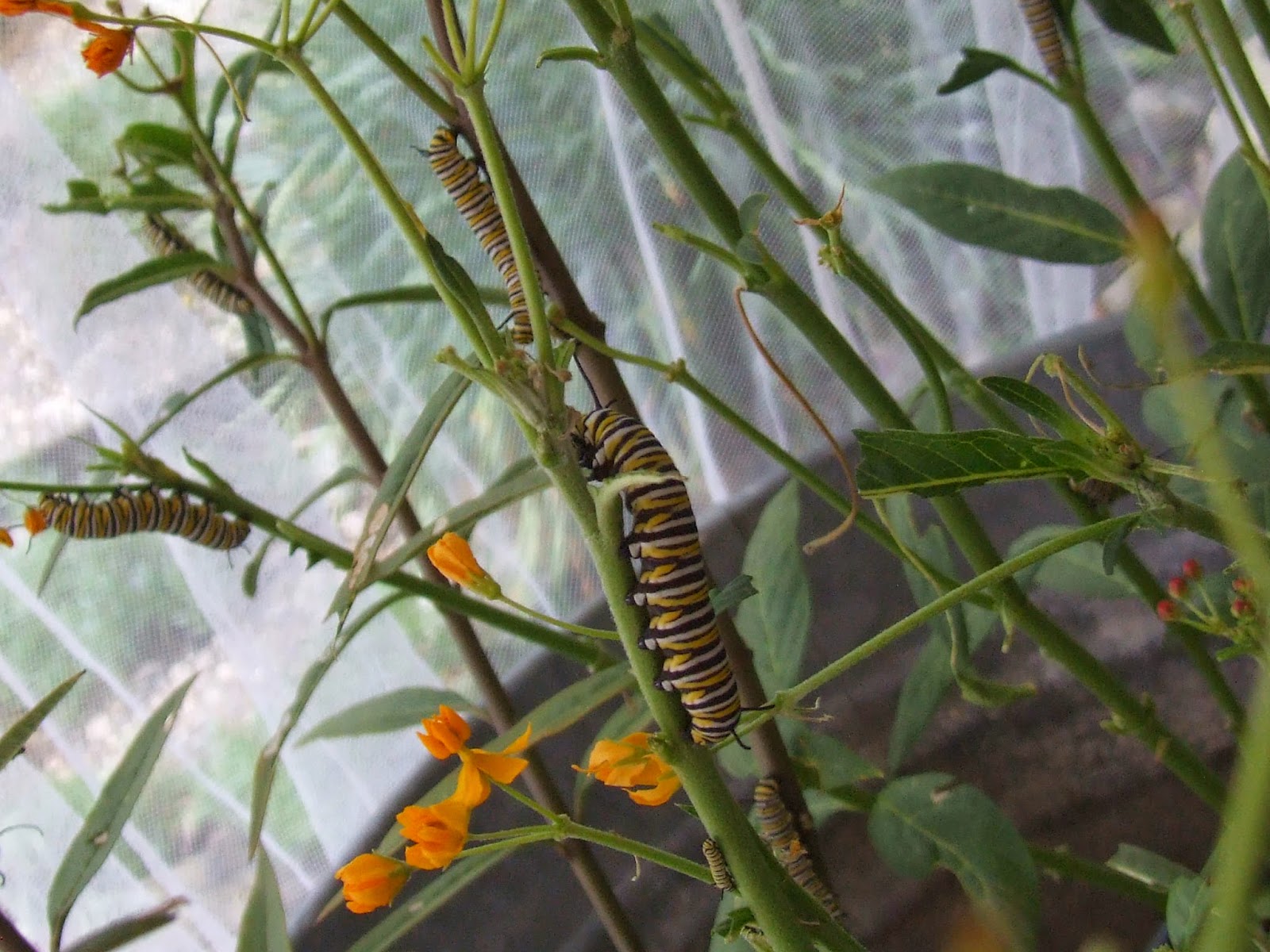 I have one plant on my hill, full of seed pods which we will let split and re-seed so there will be  more plants.
One plant is close to the enclosure for the multiple adult female monarchs in my yard, so they have a safe plant to lay eggs on.

Here is a link to my friend who also has a butterfly enclosure and check out the chrysalis'.
susan's photos

There is TONS of info on the web about Monarchs.  I encourage you to learn more...
if you want.

Now to tell you what we stopped using pesticides MANY years ago.
One time Rob was combatting ants and was using a typical home defense perimeter spray.
He got close to a large lantana bush and lavender bush and accidentally over sprayed.
Within hours, this is what lay on the ground... 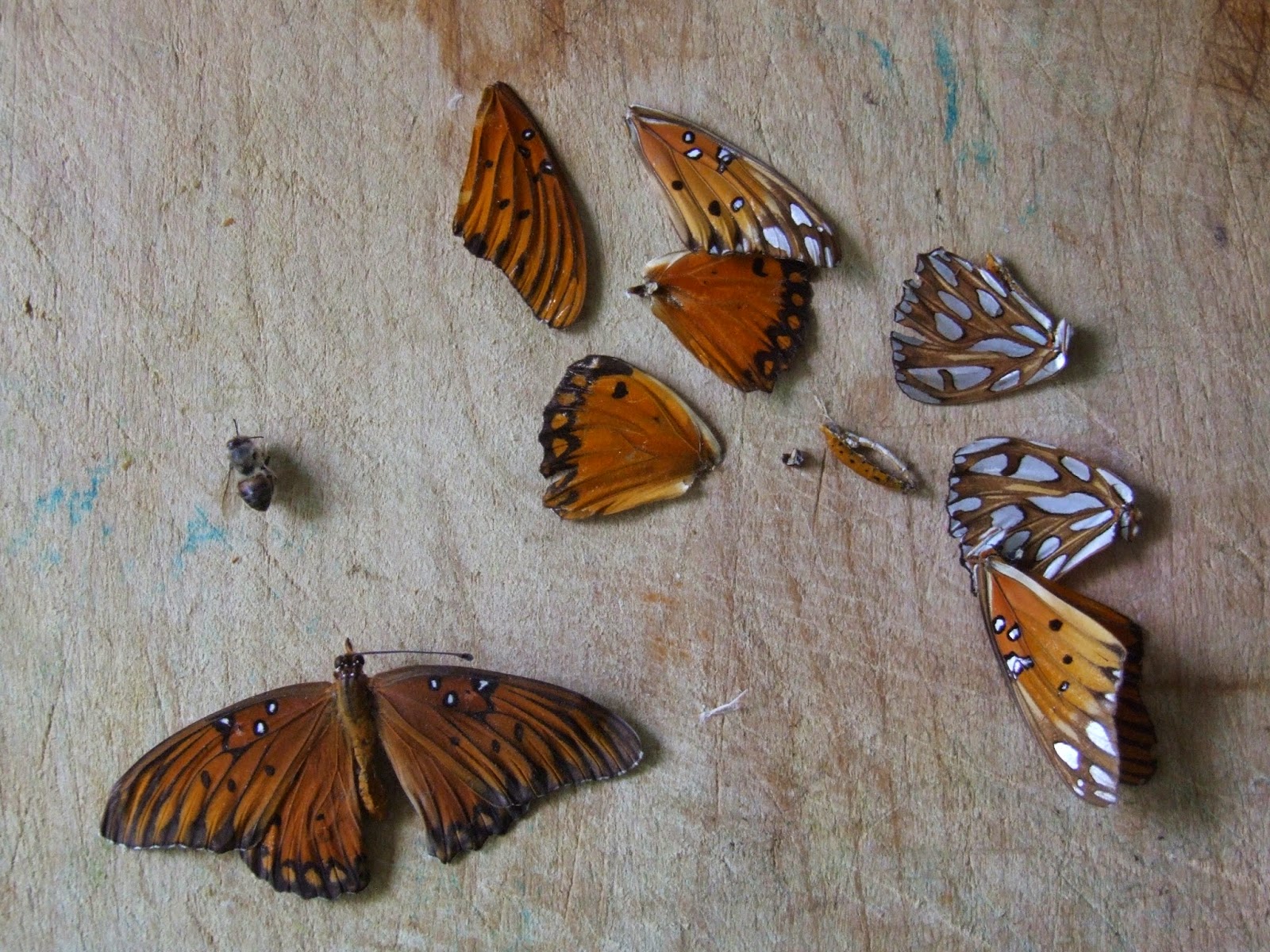 Yes, I saved them their dead bodies, they are part of my nest collection and a reminder to us.
We have not used that stuff since.
The single wings I am going to use in an art project eventually.

Next bad pesticide...ROUNDUP.  Crab grass.  Rob was using it to kill crab grass and some got on a rose bush.  The part of the rose bush started growing really weird shaped flowers and disfigured leaves and eventually that part of the bush died. 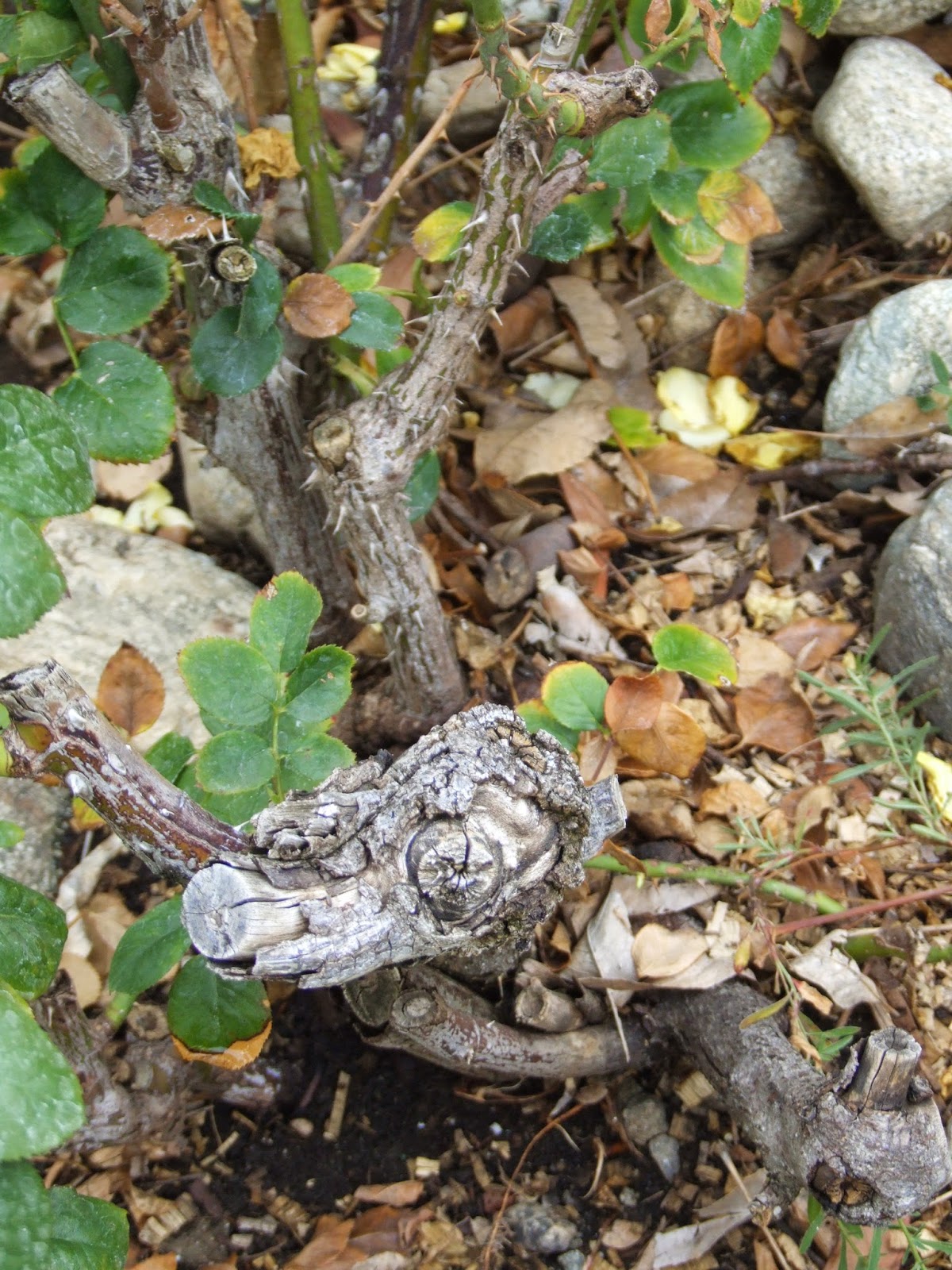 Why the little lecture on Pesticide?

Seeing what it has done firsthand in my yard with wildlife and plants.
Do you really want to eat that stuff??? 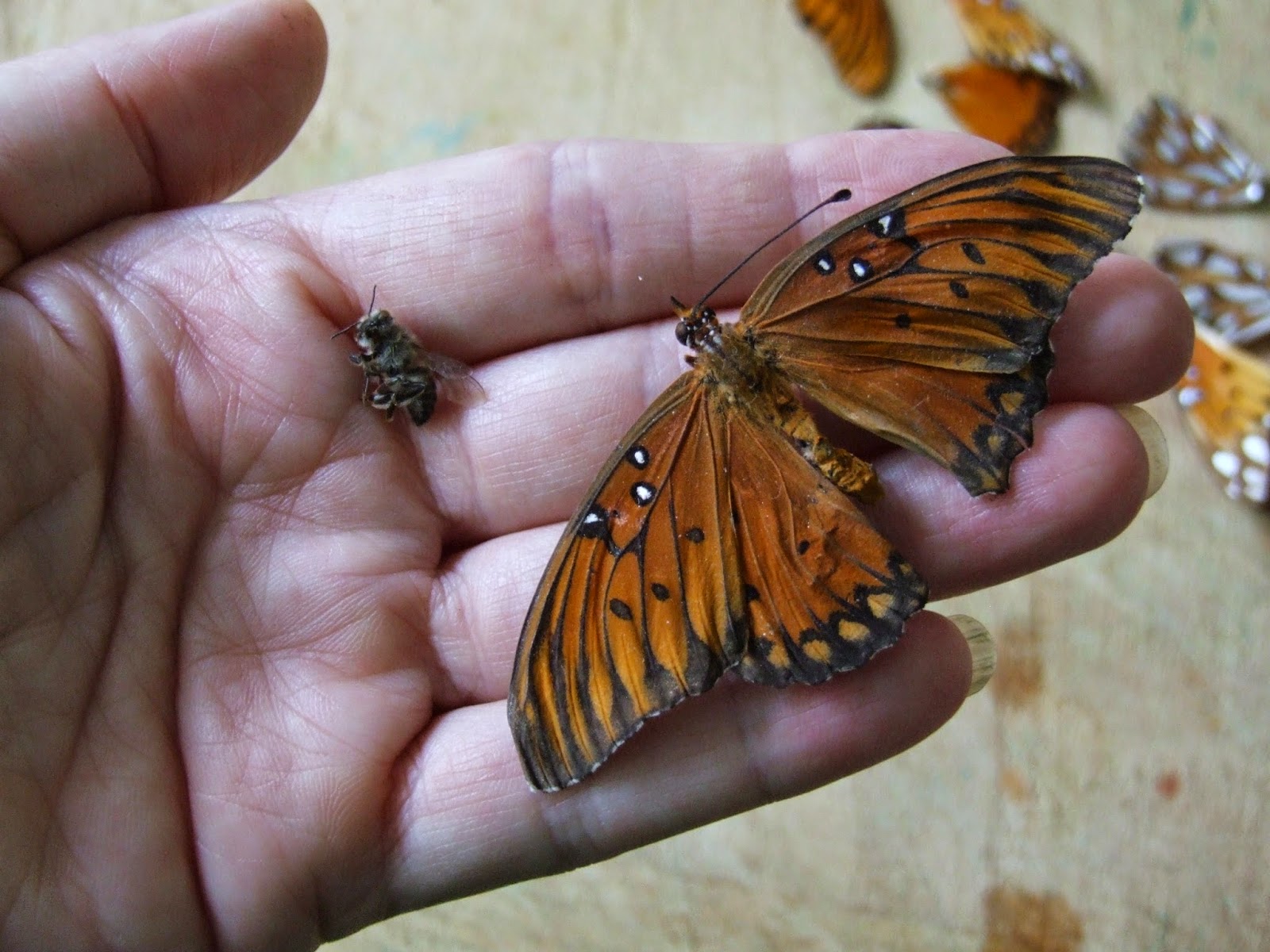 Bees are also endangered as are monarch.
Pesticides ARE to blame.  Do your own research as we have.
These pesticides are banned in Europe and most of the non corporate/government run world.
Do your part.  Whatever you can.  Boycott pesticides, buy organic, create an healthy environment in your yard.  Grow food not lawns.  No act is too small.

If we lose these pollinators, we have NO FOOD.

"Be the change you wish to see in the world."

I will be updating the status of my Monarch Project,  Please join me via