Very gratefully, 2015 has been the year I had a lot of online sales and many commissions and custom orders. My last order for the year is a plaster and wax piece for the lady I got my sweet dog Charlie from. She and I have become friends and this is for her daughter for Christmas. The saying is from a country song which she always sang to her daughter when she was little. 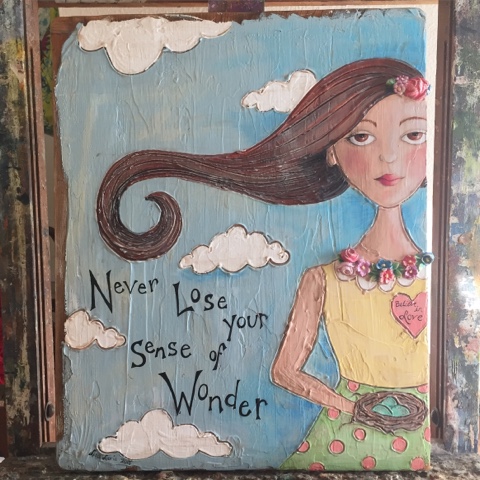 One last order to be shipped this month is my little bee girl pendants. They make me smile and are gifts for adult twin sisters from a loving aunt. 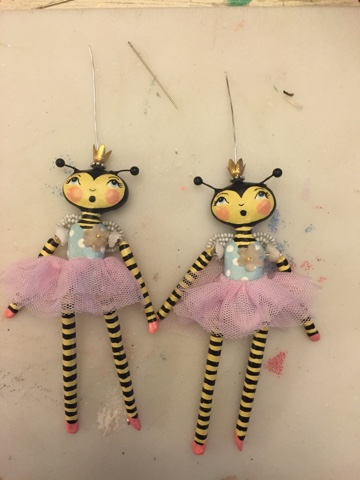 Next on my agenda is to concentrate on my goals and plans for 2016. Love my Brand new Heidi Swapp planner. 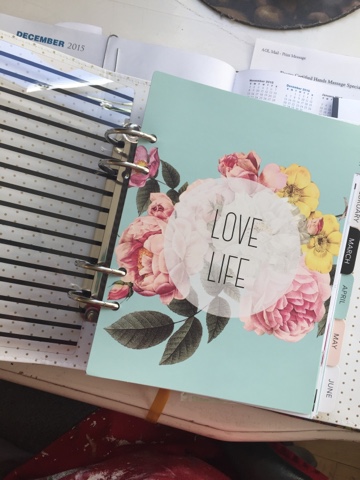 I also have printed every single free resource worksheet from the Do What You Love for Life people. I highly recommend their site for quality content on business. Their worsheets are definitely helping me and are part of my 2016 business plan.
http://dowhatyouloveforlife.com/
Hope you have a great holiday! Time for me to get back to it!
Posted by Lisa Loria at 2:25 PM No comments:

Email ThisBlogThis!Share to TwitterShare to FacebookShare to Pinterest
Labels: Do What You Love For Life, Heidi Swapp 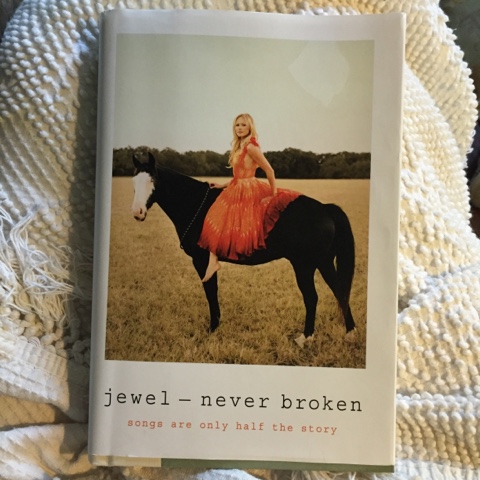 Always one of my favorite female singer songwriters. Jewels Autobiography, "Never Broken" is not disappointing. This morning I read a paragraph that resonates with where I am at right now in breaking away from social media for awhile. Here is the excerpt...
"Eventually I made it back to Alaska for the rest of the summer, and I got a small cabin at my aunt Mossy's. I wrote feverishly, spending two weeks in silence. I cannot overstate the importance of silence to young artists, or anyone seeking a creative voice. It takes great influences to find your way to unique self expression. You must stand on the shoulders of artists who have gone before you. Read great works. See great arts. Listen to great voices. This sets a bar for your spirit and psyche to work toward. Then you must dive inward into silence. Stand on the rippling edges of the expansive universe within your own being and create from there. Don't compare yourself with what's popular. Doing so is like one child comparing himself to another. Greatness is never achieved by trying to imitate the greatness of another. Greatness is chipping away at all that does not belong to you and then expressing yourself so truly that others cannot help but recognize it. It is in silence that we discover ourselves. The silence and the unknown can be frightening, but with time it stops feeling like there is nothing there. The darkness and silence will begin to feel like a void in a positive sense-the womb of creation. It is the magical nothing that something is birthed from. Feed yourself a diet of great work, no then go away by yourself and listen alone to your soul speak to you. Silence will be your greatest teacher."
Such great words of advice. Especially with an online community that is so easily "inspired" by other people's work. So much so that the lines of originality are often blurred.
I have an even greater appreciation of Jewel Kilcher. What an adventure ridden and often sad trying life. Great book so far and I'm only half done. 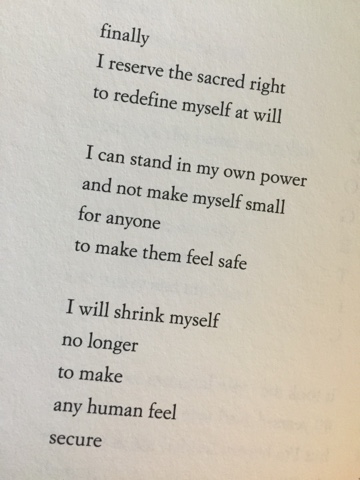 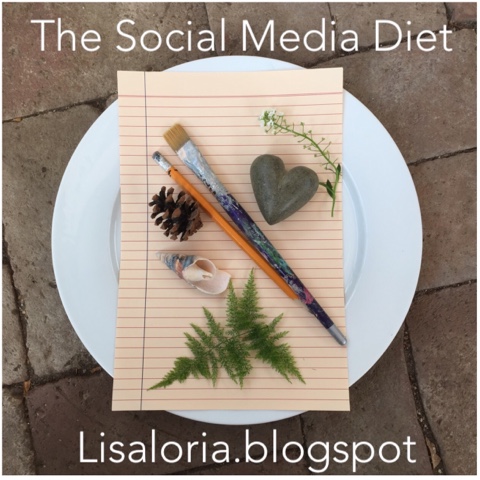 Several years ago, I took the month of August off of Facebook, deactivating my account. It was glorious.  What DID we actually all do before social media anyway?  Facebook, Twitter, Instagram, Pinterest and all the other online social apps that the younger kids seem to use.  For months I have been wanting to do my own social media diet again.  But with my business, thought it maybe wasn't the best idea.

What is social media anyway?  A means to connect.  Share ideas. Thoughts. Pretty Pictures. Food. Recruit followers (even Terrorists use it). A virtual means to Sell...thoughts as well as things. Social media can be enlightening, fun and oh so very toxic.

For many artists, it's a means to get ones work out there and connect with your customer.  With the dawn of Facebook burying posts from a fan page (unless you pay $ to get your page into the very peoples feeds who LIKED your page in the first place) the fan page now seems useless.  So I accepted virtually every friend request I received. (unless it looks like a fake account, which is an entirely different topic-#click farms)  Using my personal page to advertise my work, sales, etc.   I have met some cool people in social media, new customers (thank you for your support of my work)  and developed some great friendships.  I have also unsubscribed  A LOT from people's feeds.  This platform that was suppose to connect friends has become a "Propaganda Playground".  The PR heads of political parties, lobby groups, and corporate advertisers  LOVE facebook. Create a Meme and put it out there, then the "Sheeple" repost it like it is Gospel truth, when in fact an enormous % of the time, the facts are wrong or misquoted to create a manipulated outcome, ultimately creating only MORE divisiveness.  My honey and I are avid truth seekers and have logged way too many hours since the dawn of facebook verifying and calling out the people spreading propaganda.  With the current US political environment, hot button topics such as guns, abortion, immigrants, refugees...Holy crap, the hate and intolerance flies like mud pies in a pig sty.  Actually, I think pigs are nicer to each other than humans are online.   Being the social activist and truth seeker that I am, it is SUPER hard for me to not get into theological and political debates with people.  So, I unsubscribed more...even from people whose thoughts and beliefs mirrored mine.  Because there is ALWAYS someone who posts a hateful comment and I find it hard to bite my tongue, or should I say stop my fingers from typing.

The voyeuristic way "friends" stalk other "friends". Reading their comments on other people's posts, then passing judgement.  Been to lunch with a group of women?  Ever hear the lines such as "did you see what so and so posted on facebook?"  "I had no idea she believed that...____(fill in the blank"  "oh, she is a hot mess"...etc, etc, etc. "we make fun of so and so behind her back because of her political beliefs"  I've heard this and more.  We all have.

There is so much sadness and turmoil in the world right now.  Facebook was supposed to be fun.  But when I read such hypocritical and hateful things, rampant lies, it raises my blood pressure...making both my heart and head hurt.

Not that there aren't some good times on FaKebook as well.

I truly hurt for the world right now and every single being in it...even for the bad guys and their sour souls.  I hurt for some of the people I call "friends"  who are so full of venom themselves, that they don't even see the hypocrisy in it.  The intolerance.  Hate begets hate.  Judge not least ye be judged.  Only LOVE conquers all.

To me, Social Media = Social Experimentation by the powers that be. All the pages, articles and stuff "suggested" to you by face books algorithms. The latest trending on the sidebar,  suggestions to buy the last item you looked at on whatever site you last visited.  "don't let it get away..." Who wants to be a puppet? I am cutting my strings and going back to the days of no social media for awhile.

Why am I putting this out there for you all to read?  So you all know a few of the reasons I am taking a break....just in case you miss my sunny disposition online ;-)

Secondly, I want to take time for some internal truth seeking of my own.  A sabbatical for my soul.  I need to reconnect with my deepest self.  Explore, play, discover and bring to life some of the ideas I have had buried for awhile because of self doubt.  To shut out the outside world as much as possible, except for my CNN updates, grocery shopping (yippee) and real time stuff. :-)  So I can return to social media with a more peaceful soul...a clearer vision...a new manifestation of my work and what I want it to say to the world. Because ultimately, more than anything.  I want to make the world a better place and bring only light and love to the "Table of Life".

May you each have a Wonderful Holiday Season, however you celebrate it. See you in a few months.