I grew up around dogs, mostly small breeds, but my Dolly (grandmother)
always had medium/large dogs many an afternoon was spent lying on the grass with her dog Sammy. He was a collie/black lab mix, my head on his stomach, gazing at the sky, blowing bubbles or dandelions & just talking to him.
It wasn't until September of 1996 when my husband said a coworker's labrador had puppies,
I was so excited to get to go out and choose one.
My older two sons were in school, so one sunny day, my youngest son Dylan, then age 3 and I hopped in our mini van and made the treck from Covina to Yucaipa.
We arrived to a home on 3.5 acres, a Mom with three small children greeted us.
She escorted us to the back yard where in a goat pen were 11 puppies.
Although the mother dog was a chocolate lab, the dads were all fence hoppers,
so the puppies had all sorts of characteristics.
I was instantly drawn to the three spotted ones.
She lead us and the puppies to a large lawn area where we sat on a small retaining wall
and watched the puppies and four small children run around the lawn together.
One of the spotted puppies had a collar on and her kids kept telling me, that I couldn't have that one.
That was the one they were keeping. It was a male though, and we were wanting a female.
Their Mom leaned over to me and said, never mind them, you can have whichever one you want.
As we were watching the chaos, over trots one of the spotted females who sits right in between the two of us.  I looked down at her and commented, "how cute is this that all the other puppies are being maniacs and this one comes over and sits with us."  The lady told me how this one always seemed to key into her above all of the other puppies. 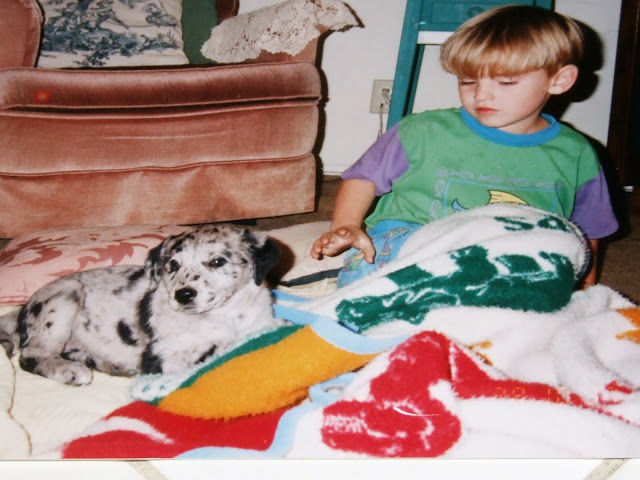 That was it, this was the one.
I really knew nothing of dogs at that time, but my gut told me this would be a good dog.
I LOVED her spots and the tiny sliver of blue in her right eye.
Dylan and I loaded her up into a box and brought her home.  She cried the entire way
and proceeded to whine and barely eat for almost three days after.
She seemed depressed and missed her Momma dog.
We named her Phoebe.
Once she got over it, she settled in quite well with our young family.
The boys were 10, 5 and 3 years old and there was plenty of activity for her.
I believe the greatest bond with any of my sons to her was Dylan.


(Notice in most of the pictures, it is him with her) 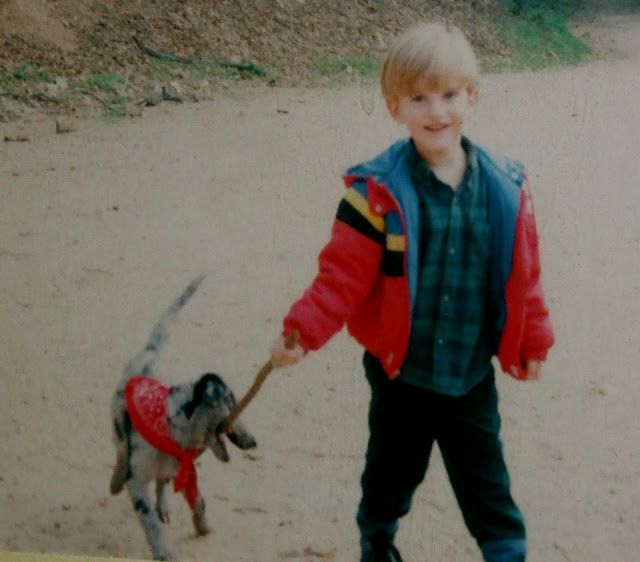 Phoebe had a lot of adventures with us, hiking, camping and each and every day, for as long
as this dog could jump in and out of a car, she went with me to
take and pick up my boys at school. 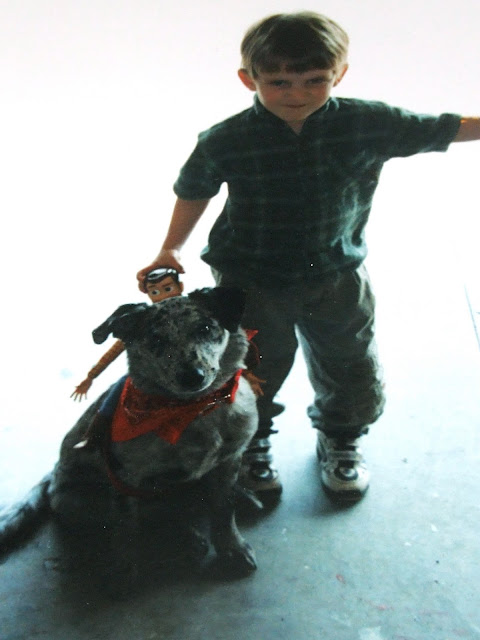 SO many nights, in our condo, when my husband and children were asleep, I would retreat to my little corner of the garage where I had a craft space setup.
On warm evenings. I would leave the garage door open while working.
Phoebe never left my side when that garage door was open.
She would sit at the opening, sitting straight up on guard, keeping watch up and down the alley.
If she saw a person coming, she would growl, warning them that she saw them and me that someone was there.  She never door darted or wandered.  She just stayed close to us and would herd all of the kids as they were playing.  Being half Australian Sheperd is where these traits came in and even though she was only half Aussie it was her that made me fall in love with the breed.
Once we took her to Bonelli park and it was her first encounter with ducks.
This large flock of ducks saw us coming and quickly escaped to the safety of the lake.
Phoebe was really intrigued and ran back and forth across the shoreline, each time she stopped
placing her paws inch by inch deeper into the water, until all at once, she leapt and plunged headlong into the lake.
We start frantically yelling at her to return, but she had it in her mind to get closer to these ducks, who just quacked and swam farther out.
Thinking, Crap...I am going to have to go out in the lake to save my dog, because I had no idea she could swim this well....this is where the Lab in her kicked in and she LOVED the water.
Turn on a hose and Phoebe went nutz, a little obsessively. 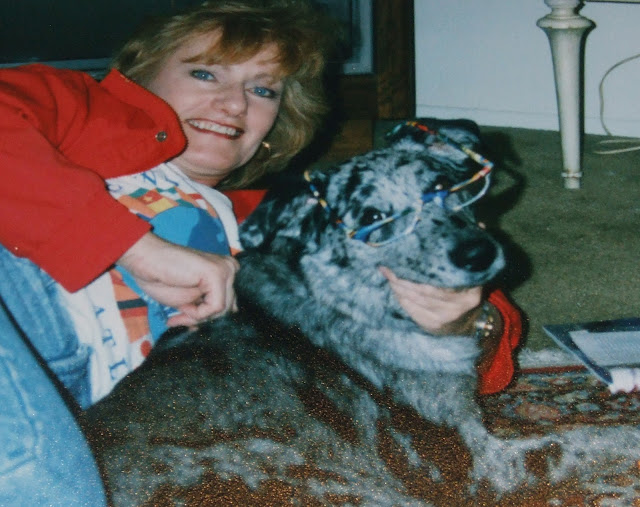 As life for our family changed and my first husband and I split, he took the cats, but Phoebe came with me.  She was MY dog and there was no negotiation about it. 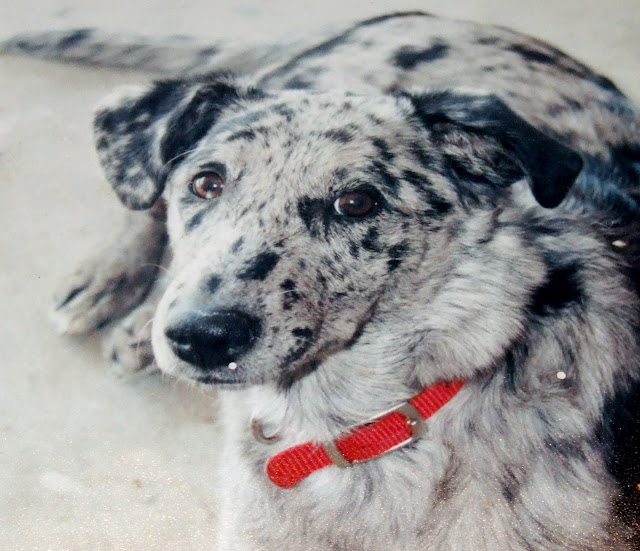 The first time John (who would become my second husband) came to the house, I warned him.
Phoebe doesn't take to men too well, so beware, she might growl at you.
Within minutes, she was laying beside him on the floor.
I stood in awe and he simply replied,
"My dad always said trust the instinct of your dog".
And Phoebe was right, John was a good man
After awhile, she became his dog.
She went to the ranch to visit the horses and every day when he came home from work, she would hear his truck a block away and be at the front door waiting for him.
I have to admit, it use to get me a little jealous. 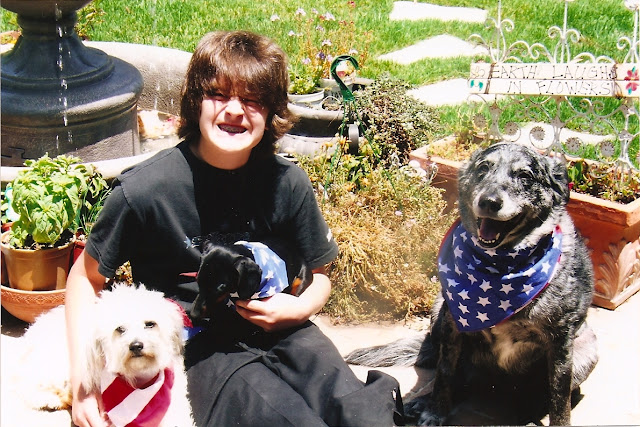 When John died it took Phoebe weeks to not look for him and once in awhile when she heard a truck that sounded like his, she would go to the window and look for him.
It was heartbreaking.
In time, she was mine again and has always slept on the floor beside my bed.
As a matter of fact, there are now 3 dog beds and one kennel that lines the wall beside my side of the bed, where all of my dogs sleep except Lilly the wiener dog who sleeps buried under the covers
with Emily.

When Rob came into our lives my Mom said the same thing about him,
"oh, Phoebe likes him? He must be alright then"
Rob lovingly embraced my human and canine children with his whole heart
and they love him back equally. 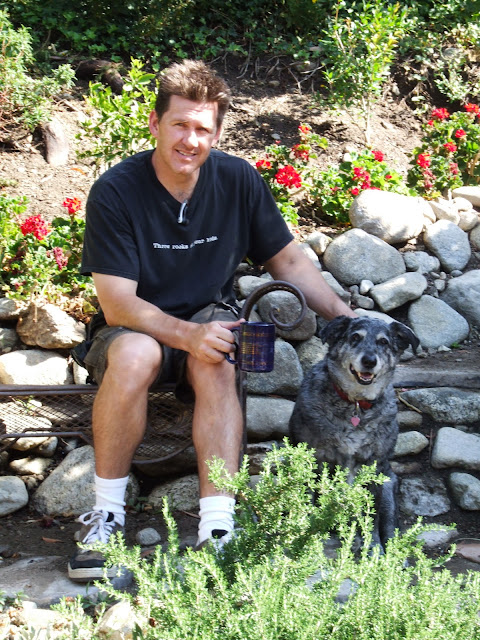 Years of Frisbee, hiking in the mountains, playing fetch, playing in the water watching each of her boys and Emily grow, she has been the most loyal and loving dog.
As she has aged, she greets me less often at the door, her hips, hearing and vision fading.
She tries to play as much as she can, bunny hopping as her back legs are so bad, only to barely be able to walk the next day.  Like all of us when we age, there are good and bad days.
Days she eats and days she doesn't. Days she just lays in bed all day, especially when it is cold. 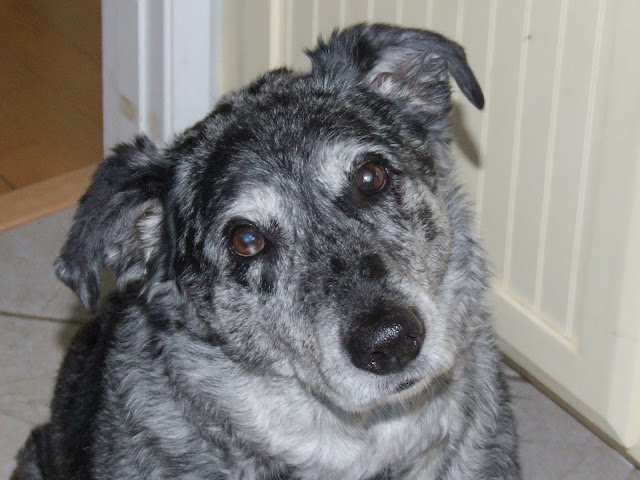 It is hard to watch someone you love, Human or animal age and fail.
6 years ago, I had a large fat tumor removed from her side, extending her life.
This past year, another grew lower than the first and in the past few months it has doubled in size to that of 10 by 9 inches protruding from her and stretching her skin to the tightest it could stretch.
I have no idea how large it is on the inside.
The vet has warned me it could burst and then what kind of trauma would the end of her life be?
At 15.5 years old (108.5 in dog years)
after much discussion with my family and her Vet, we have decided to say goodbye.
It has been a hard week for me, questioning myself if the time is right,
but my family keeps telling me it is.
So, if I ever hear someone say, "it is just a dog"
I might slap them and say, look again, it is a loyal friend and family member for life. 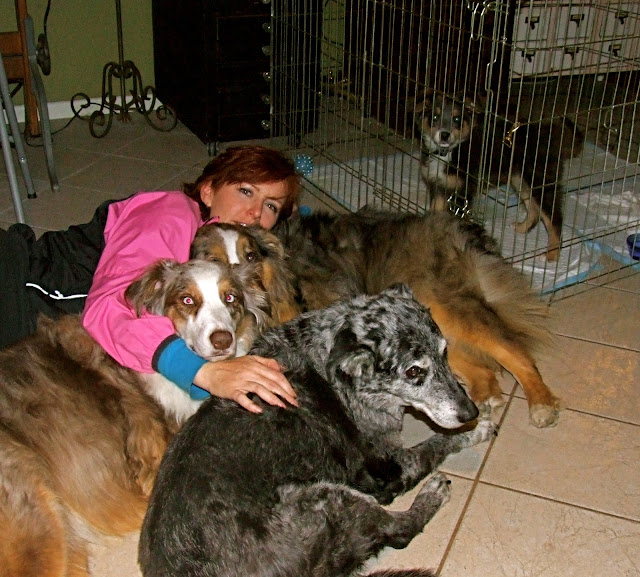 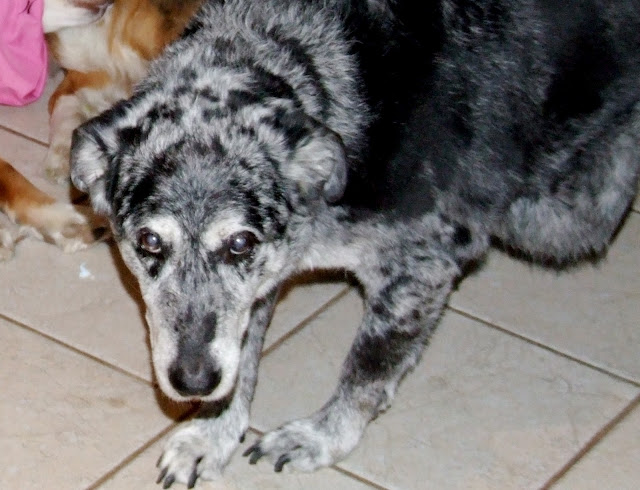